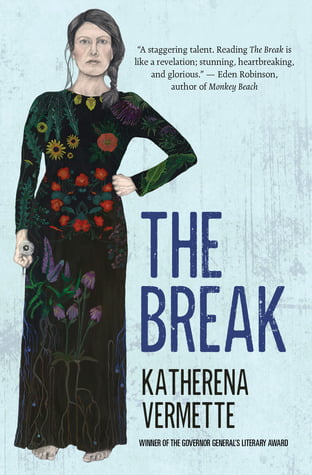 
I fell into this story from the very beginning, like I was in the bodies of the characters as I read, feeling the wind in their hair, the buzz of the hydro lines in their ears. The story is told in many voices, each as immersive as the one before. The many voices and their stories weave together to reveal a larger story of the community as a whole. This story is about trauma but it is also about what happens next. Family love. Resilience. Carrying on. Hope. It hurts to read but it needs to be read. As Candy Palmater said when she defended the book on Canada Reads in 2017, “This country is in need of healing in a way that it never has been before. And this book is the book that could heal a nation.” Read this book. It’s set in Winnipeg, it’s brilliantly written by a Métis Canadian woman, and it will change the way you see the world. ~Laurie, Carberry Branch Supervisor

When Stella, a young Métis mother, looks out her window one evening and spots someone in trouble on the Break — a barren field on an isolated strip of land outside her house — she calls the police to alert them to a possible crime.

In a series of shifting narratives, people who are connected, both directly and indirectly, with the victim — police, family, and friends — tell their personal stories leading up to that fateful night. Lou, a social worker, grapples with the departure of her live-in boyfriend. Cheryl, an artist, mourns the premature death of her sister Rain. Paulina, a single mother, struggles to trust her new partner. Phoenix, a homeless teenager, is released from a youth detention centre. Officer Scott, a Métis policeman, feels caught between two worlds as he patrols the city. Through their various perspectives a larger, more comprehensive story about lives of the residents in Winnipeg’s North End is exposed.